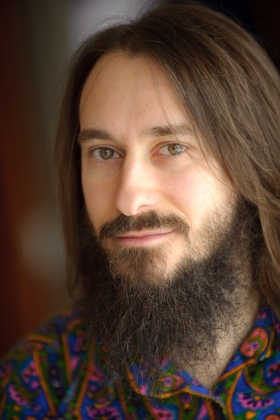 For the moment this Web Site is only in French. Music is an universal language so don’t hesitate to have a visit. You can see pictures, videos and listen to some music. Here is a short English resume of Frédéric Lebrasseur :

Autodidact musician, improviser, “noisist” and multidisciplinary artist, Frédéric Lebrasseur was born in Province of Quebec with drum sticks in his hands. From an early age, he has explored the world of percussion by playing drums, didgeridou, guimbarde, boat horn and foot-tapping (podorhythm). In addition, his musical curiosity extends into the world of electro-acoustics through his use of the laptop computer. Frederic composes, directs and improvises with numerous bands, such as Ranch-O-Banjo and Interférences Sardines. As a dedicated professional musician, he has had the opportunity to perform his music in more than 25 countries. Furthermore, through creating soundtracks for animated films with the collective Kiwistiti, Frederic has had the opportunity to work at the National Film Board of Canada. These films have won many awards and have been selected for many prestigious festivals around the world. Frederic has been commissioned to create dynamic and specific sound environments for theatre, cinema, circus, visual arts and contemporary dance events. He works with such directors as Gill Champagne, Claudie Gagnon, Karine Ledoyen, Robert Lepage or Pierre M. Trudeau.

As a multidisciplinary artist, Frederic has worked with Cargo, a puppet show (which is a co-production between Théâtre Incliné, Ranch-O-Banjo (Quebec) and Le Clan des Songes (France)). He has travelled and performed with this show in twelve countries outside of Canada. A wonderfully open minded musician, Frederic has accepted musical challenges by exploring the musical dramaturgy of a water fountain in the Quebec city of Baie-Comeau and also by directing a harbor symphony, in the Polish city of Gdansk, from a boat mast for the celebration of 20 years of democracy in Poland.

As the son of two teachers, Frederic’s passion for teaching is apparent in his musical creation workshops which he has delivered to different groups including children and people with disabilities, as well as artists from various disciplines.

The link between sound and image.